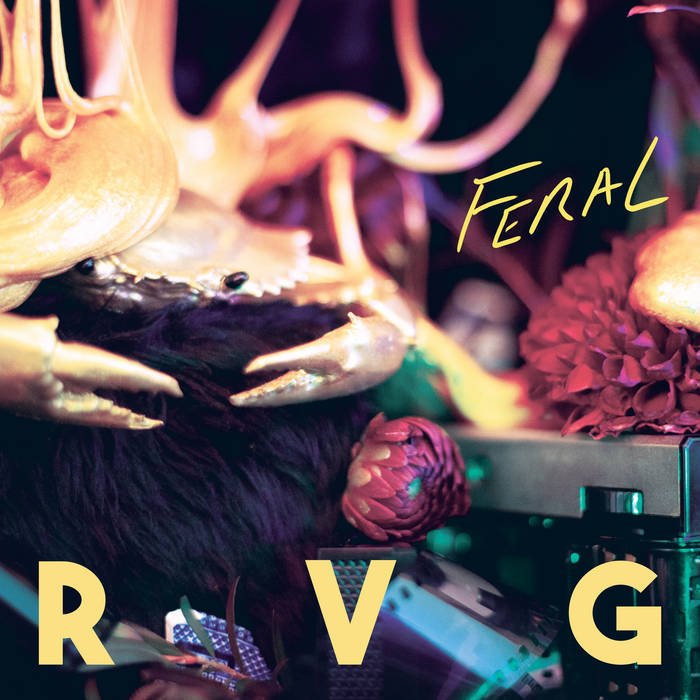 “Inciting one of its many attributes in the title, Feral is the second album by charismatic Australian indie rock outfit Romy Vager Group, or RVG. Rising out of the Melbourne suburbs with an urgent blast of lush, ’80s-inspired college rock, wiry post-punk, jangly new wave, and garage thump, they made an auspicious debut with their independent 2017 debut, A Quality of Mercy, which, in lieu of a studio, was recorded live to tape on the floor of their local rock club. Between frontwoman Romy Vager‘s eccentric songwriting and the band’s dynamic vigor, RVG quickly earned a reputation and teamed up with Fire Records for their follow-up release. Recorded and produced by Victor Van Vugt (Nick Cave & the Bad Seeds, PJ Harvey), Feral adds only a slight bit of studio luster to what is essentially still a tight guitar band playing live. Like some strange hybrid of the Go-Betweens, the Soft Boys, and Pixies, RVG‘s songs are rife with melodic guitar lines and lyrics that bounce between wry absurdism, deep personal strife, and the unruly state of politics. Undercutting her despair with a macabre sense of humor, Vagersets the tone on album-opener “Alexandra,” singing over clamorous heavily-reverbed guitars, “come Monday morning, you may find me dead, you may not find my body, but you may find my head in a motel closet or under a motel bed.” With its electric drill sound effects and crazy laughter, “Christian Neurosurgeon” is an oddly rousing gem while the more contemplative “Perfect Day” has wistful hints of late-’80s Echo & the Bunnymen. Through it all, Vager and her band cut a jagged line through punk fervor, pop charm, and rock backbone, turning in an album that is equal parts ferocious, funny, and moving” (All Music)