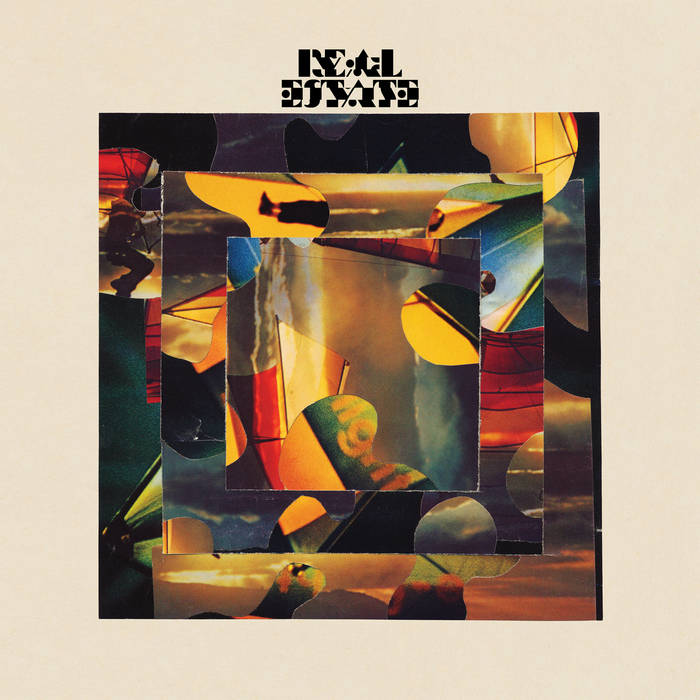 “Over the last decade, Real Estate have crafted warm yet meticulous pop-minded music, specialising in soaring melodies that are sentimentally evocative and unmistakably their own. The Main Thing dives even further into the musical dichotomies they’re known for—lilting, bright guitar lines set against emotionally nuanced lyrics, complex arrangements conveyed breezily— and what emerges is a superlative collection of interrogative songs as full of depth, strangeness and contradictions as they are lifting hooks” (Promotional Notes)

“With their 2017 album In Mind, New Jersey indie drifters Real Estate began a very slow evolutionary process, changing up their time-honored formula of laid-back, jangly pop by gently introducing new sounds and ideas. A change in their long-running membership brought in new guitarist Julian Lynch, who carried over some of the world music-influenced sensibilities that marked his excellent solo work and his new gig. Fifth album The Main Thing continues the band’s one-step-at-a-time stylistic development while underpinning their ever sunny tunes with unlikely themes of anxiety for future generations and apocalyptic dread. You’d never know this from lead single “Paper Cup,” one of the more on-brand Real Estate songs the band has turned in on recent albums. With vocal accompaniment from Sylvan Esso‘s Amelia Meath, Real Estate bandleader Martin Courtney ambles through a melody as lazy as an afternoon nap with softly disaffected lyrics that depict a protagonist stuck in a rut but ultimately not too worried about it. The production is sharp and clean, full of perfectly placed hooks like the pristine vocal harmonies that glide through the chorus or an imaginative but not overplayed guitar solo from Lynch. It’s an easy pick for a single and one of the most infectious moments on the album. There are a few other perky moments here and there (the bouncy title track returns the band to its signature jangle and “Silent World” brings together an old-school drum machine, live strings, and slippery slide guitar leads in an upbeat arrangement) but for the most part,The Main Thing tumbles by with a sleepy sway. Slower tunes like “Gone” and the bucolic “Falling Down” replace the lo-fi haze of the band’s early days with a more nuanced type of psychedelic indie songwriting. Still falling into the lineage of meat-and-potatoes heroes of hushed indie rock like Yo La Tengo, the Feelies or Felt, the more sophisticated arrangements recall the careful orchestration ofNick Drake, and Lynch’s woozy guitar playing is more Jerry Garcia than Steven Malkmus. Particularly toward the end of “Also a But,” the band breaks their warm, tuneful sound down with some ungrounded jamming that sounds like an excerpt from a particularly spacy Dead set circa 1974. Beneath the affable music, Courtney hides lyrics full of worry for the world his children will inherit, offsetting future dread with uneasy nostalgia. “Shallow Sun” sees him looking back on his own youth, wondering what’s to come for the next generation. On other songs, the mood is less reflective and more alarmed, referencing toxicity, mushroom clouds, and the illusion of control. Dark undercurrents struggle with sweetly delivered tunes throughout The Main Thing, resulting in one of the most complex moods Real Estate has cultivated. Now over a decade into their tenure as a band, they’ve moved from songs about suburban malaise and keg parties to pondering existence and the cycle of life. While this could be an over-serious buzzkill, Real Estate grow up gracefully on The Main Thing while keeping a tight hold on the low-key charm and talent that made them stand out” (All Music)