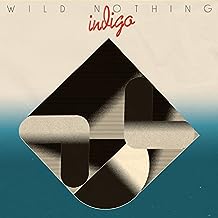 «After making the epically lush Life of Pause, which was recorded in three studios with different producers and collaborators, Wild Nothing‘s Jack Tatum wanted to do something different on the band’s next record. For 2018’s Indigo, he first made detailed demos, then took a small band into the studio and spent four days recording the songs live. These recordings were then built up by Tatumand producer Jorge Elbrecht as the duo added new parts and reused sounds from the original demos. The result is an album that’s just as ’80s-influenced as the last record, but much less fussy and more direct. Tatum hasn’t forsaken glossy production and gleaming sounds — everything here is clean enough to eat off of — and the songs are slicker than anything in the Wild Nothing catalog. In fact, they are slicker than anything in the Howard Jones or Prefab Sprout catalogs — two artists Tatumclearly reveres. This detailed, sweat-free approach could have sounded lifeless in the wrong hands, but the team here is lucky to have a typically strong set of songs to work with, and they don’t swamp the melodies in overcooked cheese. The saxes are kept on a low boil, the synths are minimal, andTatum‘s vocals are kept low in the mix as he sings calmly about heartache. The melodies and songs are strong enough that they could have withstood some less adept production; tracks like the swooning pop dream «Oscillation,» the lovely «Letting Go,» and the very hooky «Through Windows» would have shone like diamonds no matter what. Those are examples of how good Wild Nothingsound when doing uptempo pop; the ballads Tatum delivers are just as strong. The production really has a chance to come across on the slower, more measured songs like «Partners in Motion» and «Shallow Water.» The layered synths and guitars form a soft launching pad for Tatum‘s heartfelt vocals and rich harmonies. The balance of tempos and sounds makes for a well-rounded listen and it’s a step in the right direction after Life of Pause, which took the Wild Nothing sound right to the edge of overdoing it. Despite its slickness, this is a smaller album, built around real emotions and more scalable sounds, but its impact isn’t felt any less. Indigo is another block in the impressive body of work Tatum has built over the decade, and it’s some of the best retro ’80s (but not stuck in the past) music anyone is making in the 2010s» (AllMusic)