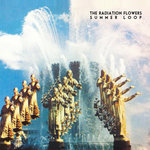 “Continuing with the softly heavy, brightly dark sounds they’ve come to be known for, Summer Loop takes on a noisier, guitar driven edge.
With the departure of their keyboardist after the release of their self-titled album, the full and textured guitar sounds of Shelby Gaudet and Christopher Laramee took an even more prominent role in band’s sound, with drummer Amber Ross and bassist Jay Allen continuing to provide the rhythm and backbeat of the band. New keyboardist Lucas Goetz added some Hammond organ to songs “Just Go Away” and “Walking Down The Street” just in time for the vinyl release ofSummer Loop” (Press Note)