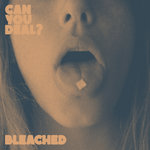 “Los Angeles-based sister duo Jennifer and Jessie Clavin knew things were going to be different for their band Bleached’s sophomore LP Welcome The Worms. Not only had they managed to charm world renowned producer Joe Chiccarelli (Morrissey, The Strokes, Elton John) to join them and their bassist Micayla Grace in the studio, but the sisters had been crawling out of their own personal dramas. While emotionally spinning, they dove head first into music.
In the studio, Chiccarelli and co-producer Carlos de la Garza (Paramore, YACHT) helped the band perfect their fervent songs into fearlessly big pop melodies. They drew inspiration from the iconic hits of everyone from Fleetwood Mac to Heart to Roy Ayers. The result is an ambitious rock record with a new found pop refinement that somehow still feels like the Shangri-Las on speed, driven forward in a wind of pot and petals, a wall of guitars in the back seat.
After touring extensively worldwide and finding success with their hit single “Wednesday Night Melody”, Bleached is back with four new blazing tracks on their Can You Deal? EP. Fueled by the experiences they’ve had as women in their calling for music, Can You Deal? takes on the complexities of issues female musicians encounter in an industry dominated by men. With this fire in their bellies, they connected with Alex Newport (Bloc Party, Mars Volta) to produce the EP. With their singularly triumphant mix of sunny melodies, thrashing guitars and lyrics highlighting the darker sides of life, Bleached continues to demand your attention” (Press)