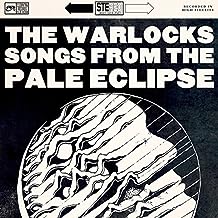 “According to the liner notes to Songs from the Pale Eclipse, the ninth album from psych-drone explorers the Warlocks, group leader Bobby Hecksher works mostly on inspiration, and once he gets an idea for a new song, he begins recording it as soon as he can. This method has left Hecksher with a big pile of odds and ends over the years, and Songs from the Pale Eclipse was assembled from his recording archives, with some of the tracks dating back ten years. If these ten songs were leftovers, it would seem they were set aside for thematic reasons and not because of questions of quality. Songs from the Pale Eclipse sounds like an archetypal Warlocks album, and is close to their usual level of quality; Hecksher and his accompanists are still sonic cartographers mapping the same psychedelic netherworld as they drift down rivers of thick, buzzy guitar and low-end drone past banks of feedback. The Warlocks have delivered another album of psychedelia for the middle of the night, with passages of narcotic bliss interrupted by undertows of night terrors, and Hecksher and his most recent allies (featuring most of the participants from 2013’s Skull Worship, including guitarists J.C. Rees and Earl V. Miller, bassist Chris Di Pino, and drummer George Serrano) bring this to semi-life with their usually impressive level of skill. As usual, Hecksher‘s lyrics are essentially an afterthought, and the finale, “The Arp Made Me Cry,” is just silly enough that it should have stayed in the slush pile. But for the most part, Songs from the Pale Eclipse once again finds Bobby Hecksher following his muse through the night skies, and the chase continues to bring him worthy results” (All Music)