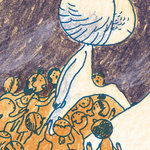 “Drug Pizza are a four piece from NYC who formed whilst all working at the same radio station. Having snuck in out of hours to record their first EP (released in 2013), they’ve finally returned with a follow up – Return to Content Mountain – which marks a (slightly) more refined side to the slacker jams of their debut.
The band are previewing the EP with ‘No Reaction’ – a chugging Weezer-indebted pop song where singer Madeline Steinberg goes from not caring about someone breaking their arm to vowing to carve their name into her body. Jury’s out on whether it’s the same person.
The band describe the EP’s themes as obsession, self-defeat, power, and anxiety and across the 5 tracks they definitely put in a good attempt at tackling each one whilst throwing in a whole range of influences (as you would expect from a band that met whilst working at a radio station). As well as the band’s listed influences (Sleater-Kinney, Television, Pixies, Nancy Sinatra) there are pepperings of Pavement throughout and as Sinister on their last release showed, they’ve been doing that whole Diet Cig thing long before they started plotting world domination” (Press)