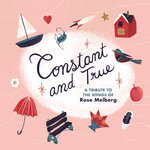 “This extremely ambitious project was conceived of, and brought to fruition by, Jeremy Jensen — leader of the Boise, Idaho, pop group The Very Most — out of his appreciation of Rose’s prolific output.
Rose Melberg is indiepop royalty. As primary songwriter for one of the very first American indiepop bands, Tiger Trap, she played an indispensable part in furthering the indiepop movement in the U.S. She went on to release music both as a solo artist and as a member of the bands Go Sailor, The Softies, Gaze, Brave Irene, Tally Ho!, PUPS, Imaginary Pants and Knife Pleats, with sounds ranging from fragile, wistful folk to giddy, fizzy cuddlecore to sophisticated, almost jazzy, pop. Her music as been released on such labels as K Records, Double Agent, Kingfisher Bluez, Kill Rock Stars, Slumberland Records, Where It’s At Is Where You Are and Lost Sounds Tapes, just to name a few.
Bands and artists from the United States, Scotland, England, Spain, Norway, France, Australia and Dominican Republic have provided tracks for this compilation. Two bands (Boyracer and Transmittens) even came out of retirement just to contribute a track! Their interpretations of Rose’s music run the gamut from pop-punk to epic, symphonic walls of sound” (Press)