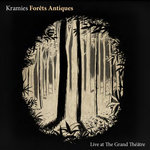 “On a spring evening in 2015, the setting sun cast deep shadows over The Grand Théâtre in Angers, France, where Kramies was due to play to a sold-out crowd. As the 700 ticket-holders took to their seats and the theatre dimmed to a single amber light, Kramies walked on stage to perform his haunting, romantic songs. This is a recording of that night.
Forêts Antiques is the new live EP by singer-songwriter Kramies, featuring recordings of tracks from his acclaimed EPs, plus a previously unreleased song.
Also includes live photos from that night taken by French
Photographer Jérôme Sevrette
“A delicately spun cosmic carnival teased upon the same unseen fragile structures that hold stars in the night sky” – ‘The Fate That Never Favored Us’