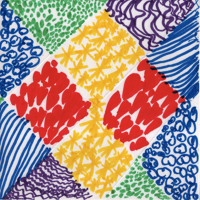 “As the million billion suns die, they coalesce into one singular form of energy, before they explode into super nova. It is the vanishing point, where you and me don’t matter, but we do. And so do you. Yes You. We are all Dying Suns, sewn into the same fabric. Endlessly dying, constantly living, in the pattern of the infinite universe.
Welcome to the world of San Francisco’s A Million Billion Dying Suns. First stop: their scorching cover of “Strawberry Letter 23,” the classic folk-meets-funk track by Shuggie Otis. In the fuzzy hands of AMBDS, the song is deconstructed to its basic parts and resurrected in a glorious squall of saturated guitars and reverb-soaked vocals. Capped by a face-melting solo outro, the cover evokes the sweaty love child of Tame Impala, The Yeah Yeah Yeahs, and Atari Teenage Riot.
AMBDS is the brainchild of guitarist / singer / songwriter Nate Mercereau. Formed in 2013, the band’s young age belies the years of experience that Mercereau and his bandmates have amassed with other projects, including Richard Ashcroft, Lauryn Hill, and NO ID. The coming weeks will see the release of the band’s debut EP, the Strawberry EP. In the meantime, catch them on tour in Northern California. Earplugs and sunglasses highly suggested” (Press)